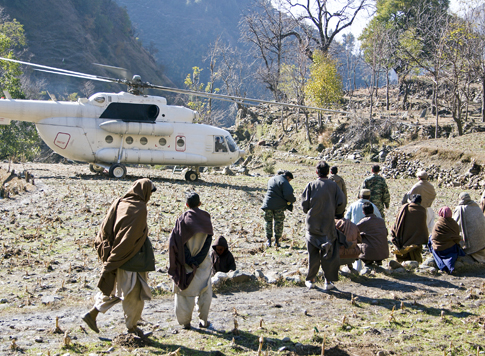 Galveston Hurricane: September 8, 1900: The Salvation Army's first major disaster response effort in the United States followed the devastating hurricane that impacted Galveston, TX in 1900, literally destroying the coastal city and killing over 5,000 people. At the behest of National Commander Frederick Booth-Tucker, Army officers from across the country moved into the Galveston area to help clean, feed and shelter the thousands of survivors, while also providing much needed spiritual and emotional support.

9/11 Terrorist Attacks: September 11, 2001: The Salvation Army was the first relief agency to reach Ground Zero, reporting within a half-hour following the first plane crash at the World Trade Center site. With its mobile canteens, counselors and thousands of volunteers, The Salvation Army served relief workers at the WTC site for over 9 months; leaving only when operations at Ground Zero officially concluded in May, 2002. In the course of the relief effort, dubbed "Operation Compassion Under Fire", The Salvation Army was granted full control of the feeding operation at Ground Zero and also distributed other essential items to relief workers. Perhaps most importantly, Salvation Army counselors provided emotional and spiritual support to rescue and recovery workers working under incredibly difficult conditions.

Indian Ocean Earthquake: December 26, 2004: An earthquake on the floor of the Indian Ocean triggered a series of catastrophic tsunamis that caused widespread devastation and killed nearly 200,000 people in coastal communities in East Asia. A full time presence in the region since the 1890s enabled The Salvation Army to be on the ground providing immediate disaster relief to affected individuals within hours of the earthquake. Restoration and long-term recovery work, including home building and repair, sanitation infrastructure improvement and business development outreach will continue in the region for the foreseeable future.

Hurricane Katrina: August 29, 2005: Hurricane Katrina made landfall on the Gulf Coast of the United States as a strong Category 3 storm on August 29, 2005. The storm proved to be one of the costliest and most deadly in U.S. history. Huge sections of coastline in Alabama, Louisiana and Mississippi were utterly devastated and approximately 1,600 individuals died as a result of the storm. The Salvation Army responded to the immediate needs of survivors following Katrina and other storms during the unusually active 2005 hurricane season. The Army continues to serve individuals and families affected by Katrina by coordinating long-term clean-up and restoration efforts, providing financial and social service support to hurricane survivors and offering spiritual and emotional care to those impacted by the disaster.

Today: The Salvation Army continues to work closely with federal, state and local authorities to assist in responding to natural and man-made disasters wherever and whenever they occur. In the last few years alone, the Army has provided on-site support during major emergency situations including the Virginia Tech shootings, the Minnesota bridge collapse, the southern California wildfires and the Midwest floods. These are just a few examples of the dozens of emergencies to which the Army responds each and every year.